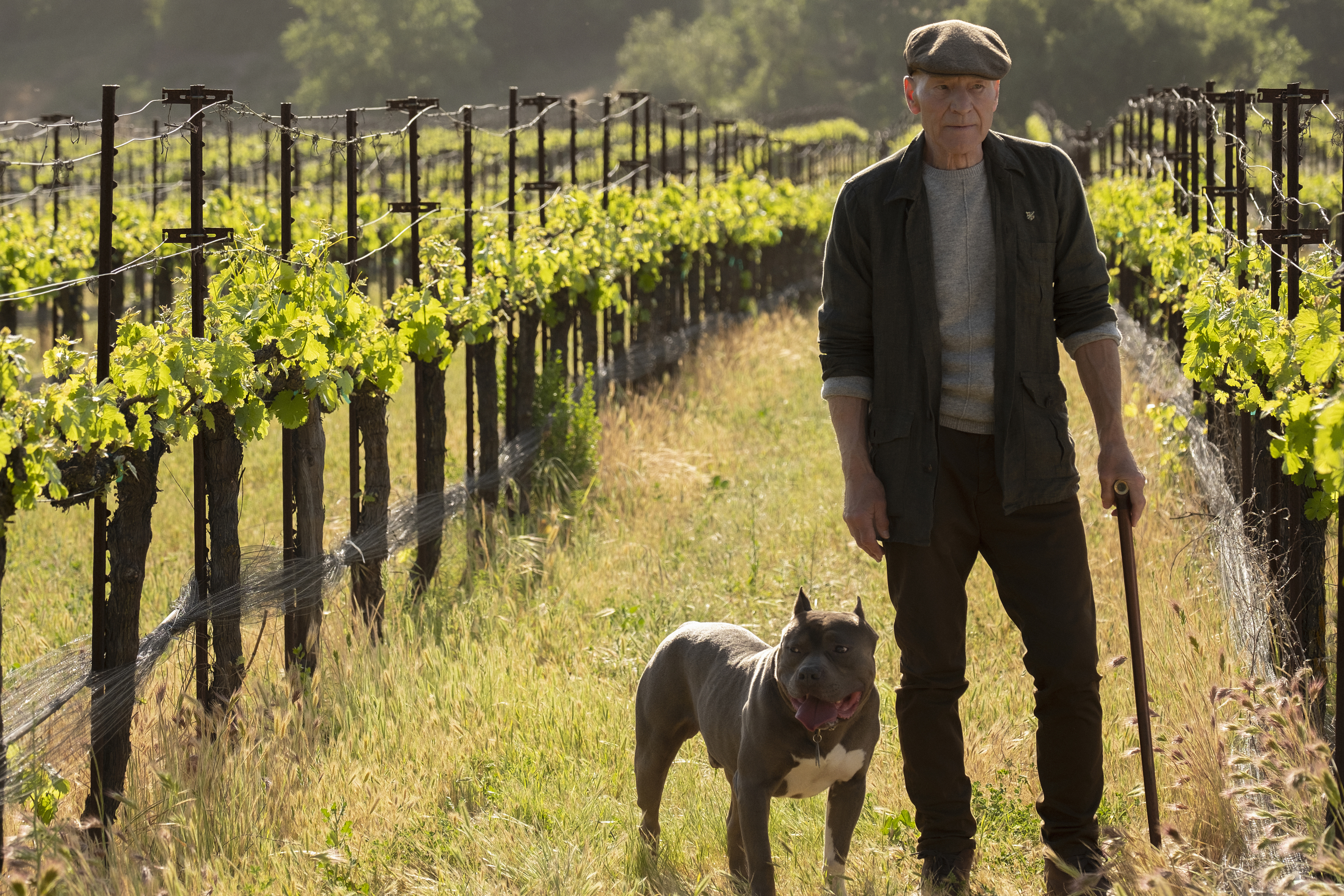 At the end of the 24th Century, and 14 years after his retirement from Starfleet, Jean-Luc Picard (Sir Patrick Stewart) is living a quiet life on his vineyard, Chateau Picard. When he is sought out by a mysterious young woman, Dahj (Isa Briones), in need of his help, he soon realizes she may have personal connections to his own past.

Jack's Review
A pretty decent start to the series...that sadly is one of really only two good episodes. The show turns into a kludge of several other (and better) sci-fi stories: Mass Effect (the super-artificial tentacle creature are the Reapers), Blade Runner (synthetics on Mars turn on humans and are eventually hunted), Galatica (nobody knows who or where the synthetics are), and 2001: A Space Odyssey (come on, the ending with Data is DIRECTLY from 2001!). The other oddball thing we see is a lack of imagination. The city shots are basically LA with some mild CGI lights added. It feels like the team making the show only watched a few episodes - like they were on in the background of the writing room and that's as far as they went. 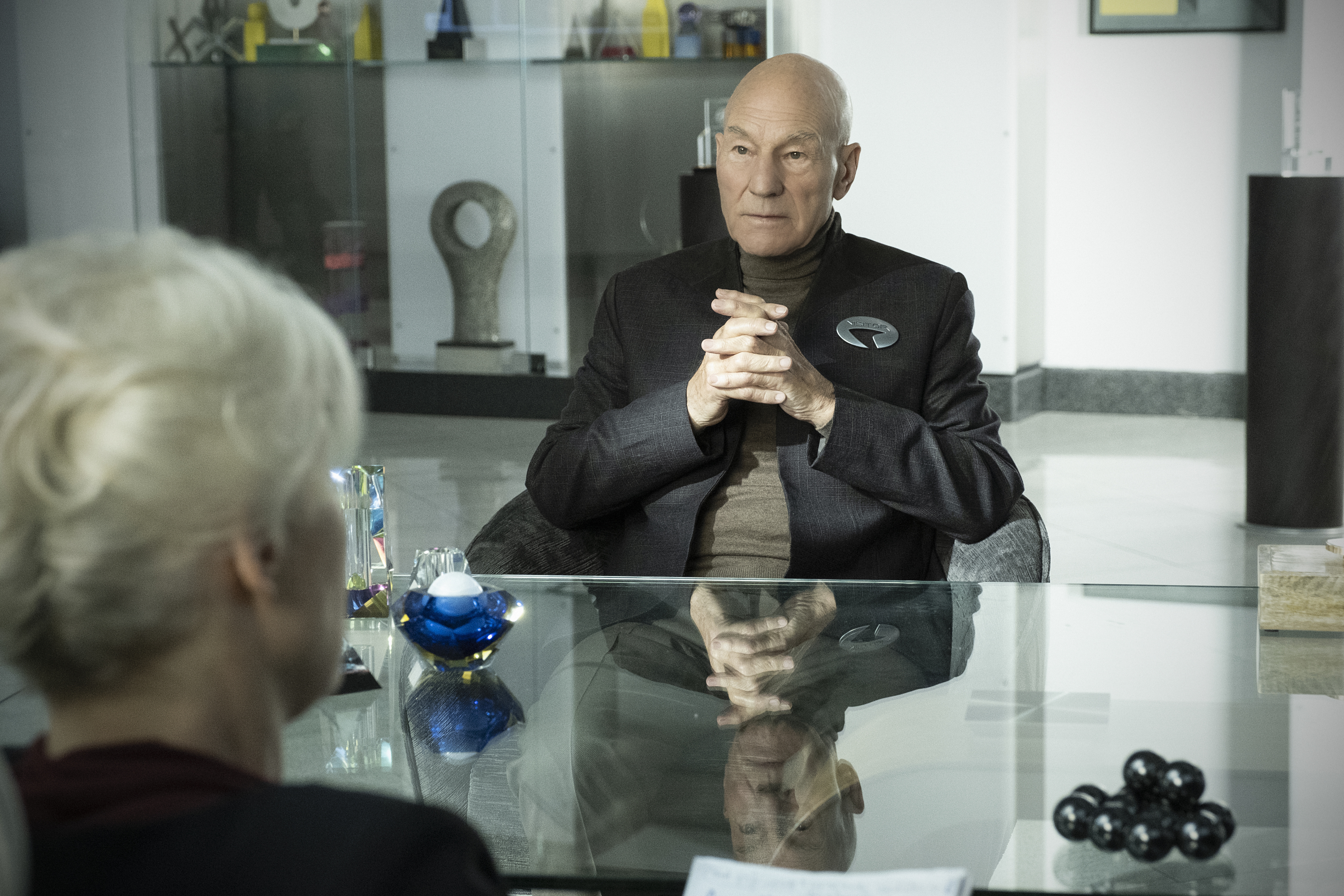 Picard begins investigating the mystery of Dahj as well as what her very existence means to the Federation. Without Starfleet's support, Picard is left leaning on others for help, including Dr. Agnes Jurati (Alison Pill) and an estranged former colleague, Raffi Musiker (Michelle Hurd). Meanwhile, hidden enemies are also interested in where Picard's search for the truth about Dahj will lead.

Jack's Review
My lord....this episode almost made me turn the show off for good. The audacity of Chabon and Goldsman having a character cuss Picard out?!? It's disgusting, out of place, and ridiculous.

The End is the Beginning

Episode:103
The End is the Beginning

Completely unaware of her special nature, Soji continues her work and captures the attention of the Borg cube research project's executive director. After rehashing past events with a reluctant Raffi, Picard seeks others willing to join his search for Bruce Maddox, including pilot and former Starfleet officer Cristóbal Rios (Santiago Cabrera).

Jack's Review
Okay at least we have some fan service here with the obligatory "engage" moment....and at least we are given a character that has some depth here too. But that depth is rather silly once we see the parallel at which Rios is involved. Rios gets some props from me since he is a cigar smoker. I smoke cigars every single day, so I give that a "wow, someone smoking a cigar in the future? Cool," thumbs-up. 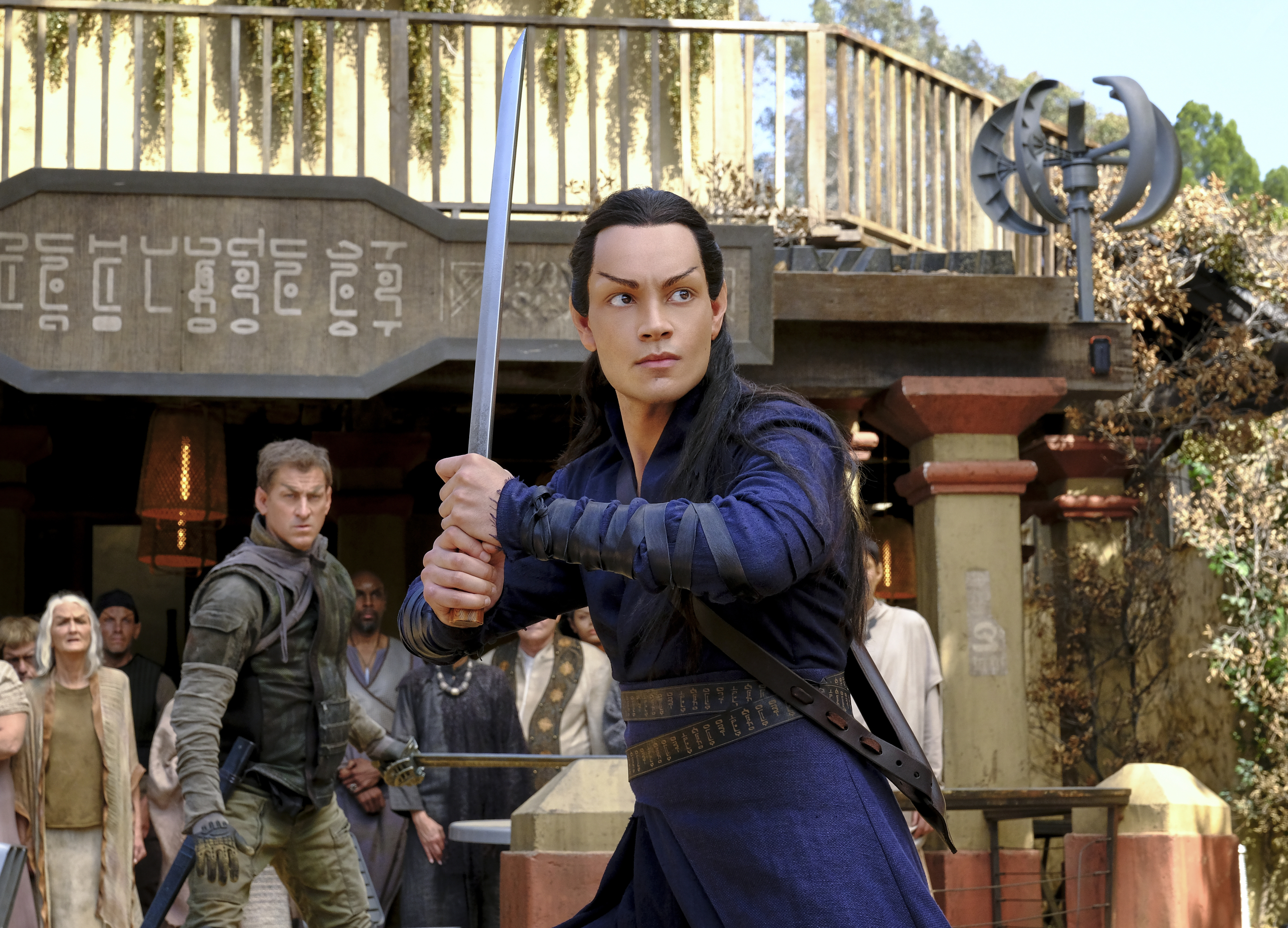 The crew's journey to Freecloud takes a detour when Picard orders a stop at the planet Vashti, where Picard and Raffi relocated Romulan refugees 14 years earlier. Upon arrival, Picard reunites with Elnor (Evan Evagora), a young Romulan he befriended during the relocation. Meanwhile, Narek continues his attempts to learn more about Soji while Narissa's impatience with his lack of progress grows.

Jack's Review
And just when Picard seems to be off on a new space adventure we have to derail the story with yet more useless backstory. I guess the writers were fans of Lord of the Rings and wanted Picard to have Legolas as a crew member? I enjoyed the wide-eyed kid aspect to the Elnor character but let's face it, he's worthless. 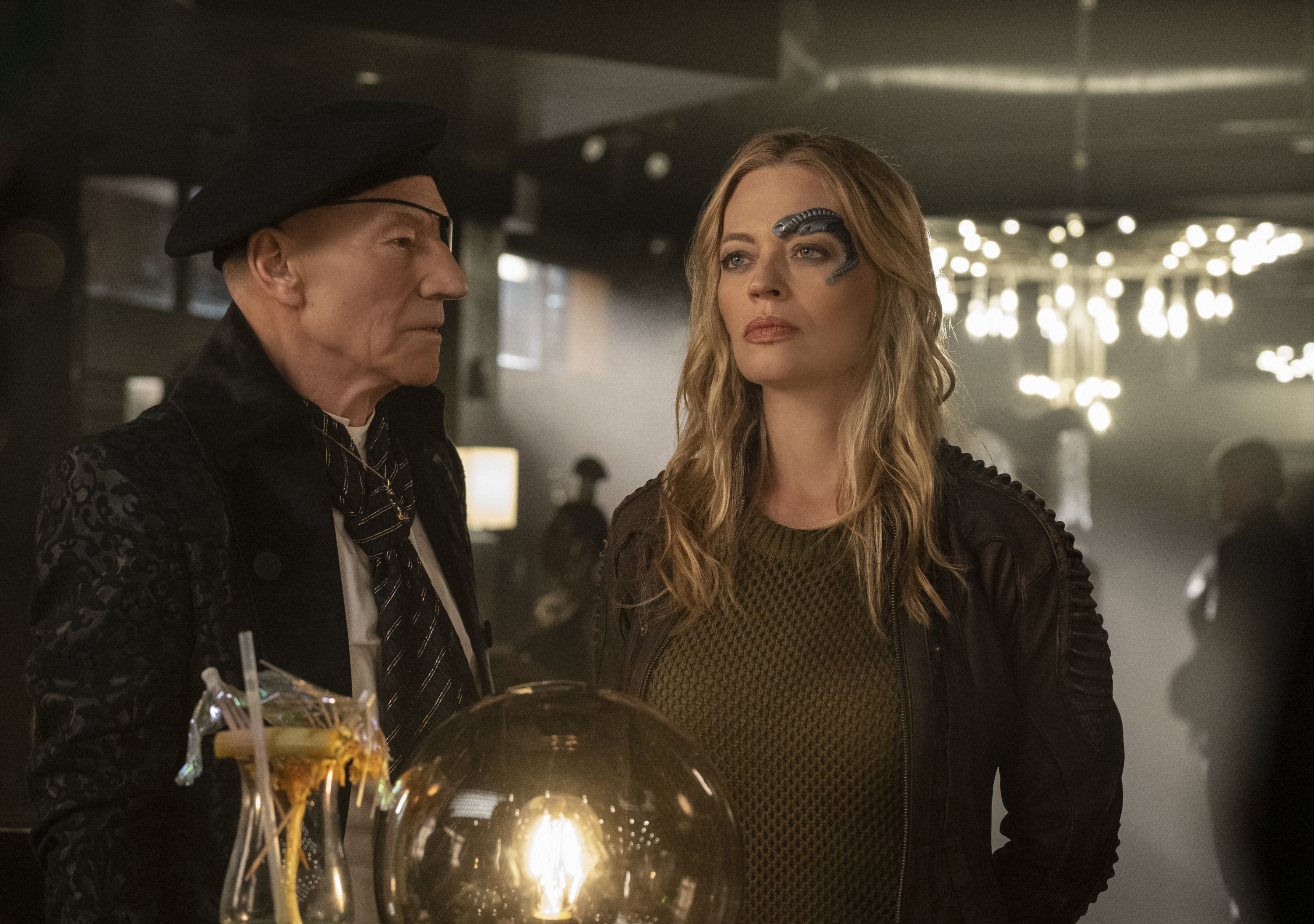 The La Sirena crew begin an unpredictable and lively expedition on Freecloud to search for Bruce Maddox. When they learn Maddox has found himself in a precarious situation, a familiar face offers her assistance.

Jack's Review
Man o man, the hits just keep on coming. The fact that Frakes directed this episode blows my mind. It's silly beyond words. So there is a rave planet out there with exclusive nigh clubs and free subspace wifi? And Raffi is an ex-junkie and deadbeat mom?!? I know Goldsman and Chabon wanted to display the seedy side of the galaxy but if you are going to do that you need to understand what a seedy side is. This hipster space bar and drama-series tropes are not seedy. The other thing that made me angry was the rather pointless waste of a terrific character...Icheb, you deserved SO much better. I will give the writers a lesson here. If you intend to use characters from a past series and the actors that originally played those roles are alive and able to reprise their roles and you can't get them for the show, or they don't want to be on the show....maybe you should come up with a better story using NEW characters. That wasn't Brian Brophy so that wasn't Bruce Maddox. That wasn't Manu Intiraymi, so that wasn't Icheb. 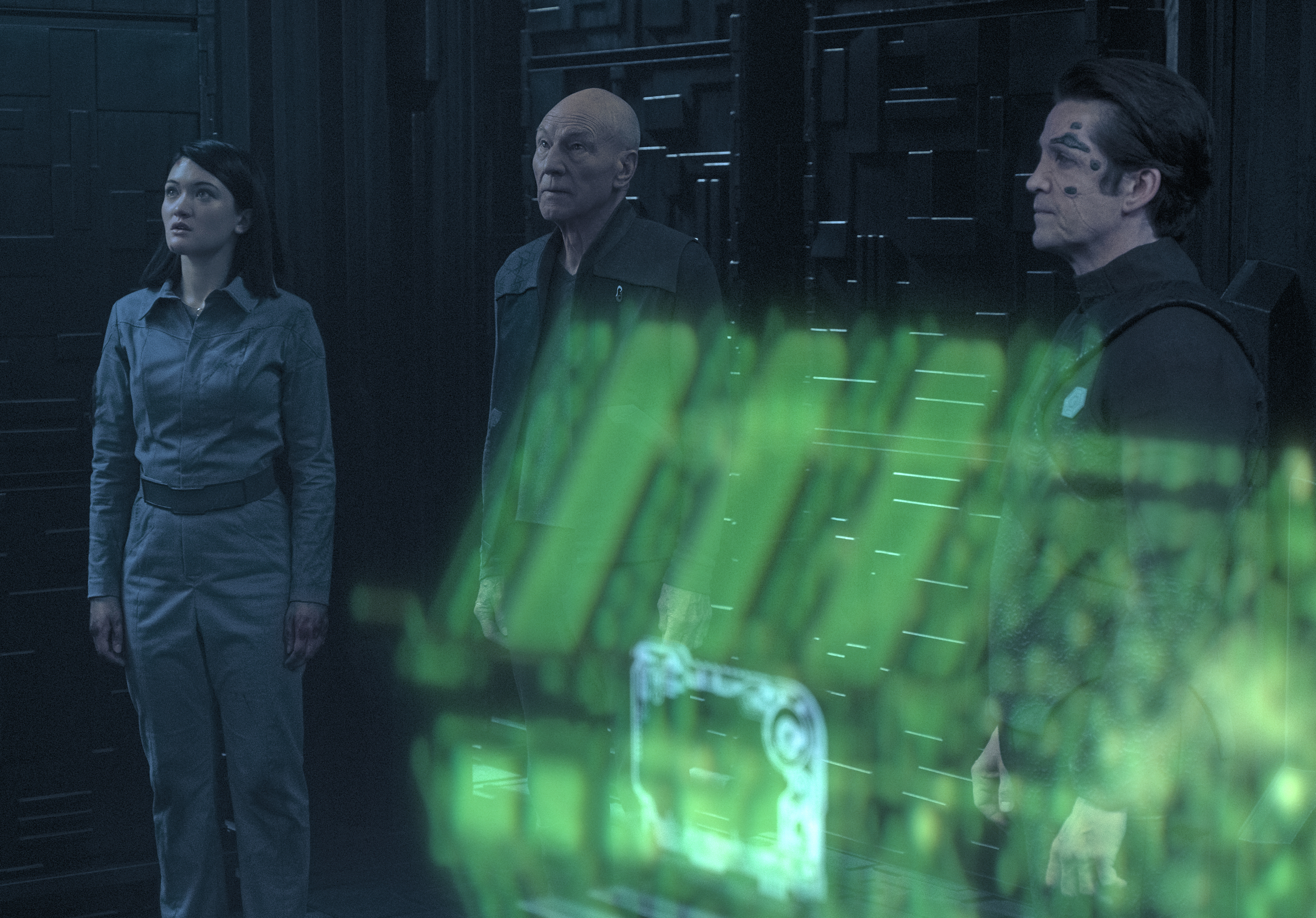 Picard and the crew track Soji to the Borg cube in Romulan space, resurfacing haunting memories for Picard. Meanwhile, Narek believes he finally found a way to safely exploit Soji for information.

Jack's Review
I will admit, Picard meeting Hugh was a huge high point for the series. Picard was haunted by being on the cube and finding a friendly face was actually a well written scene. The rest of the episode is like a D&D dungeon crawl with a first-time dungeon master. 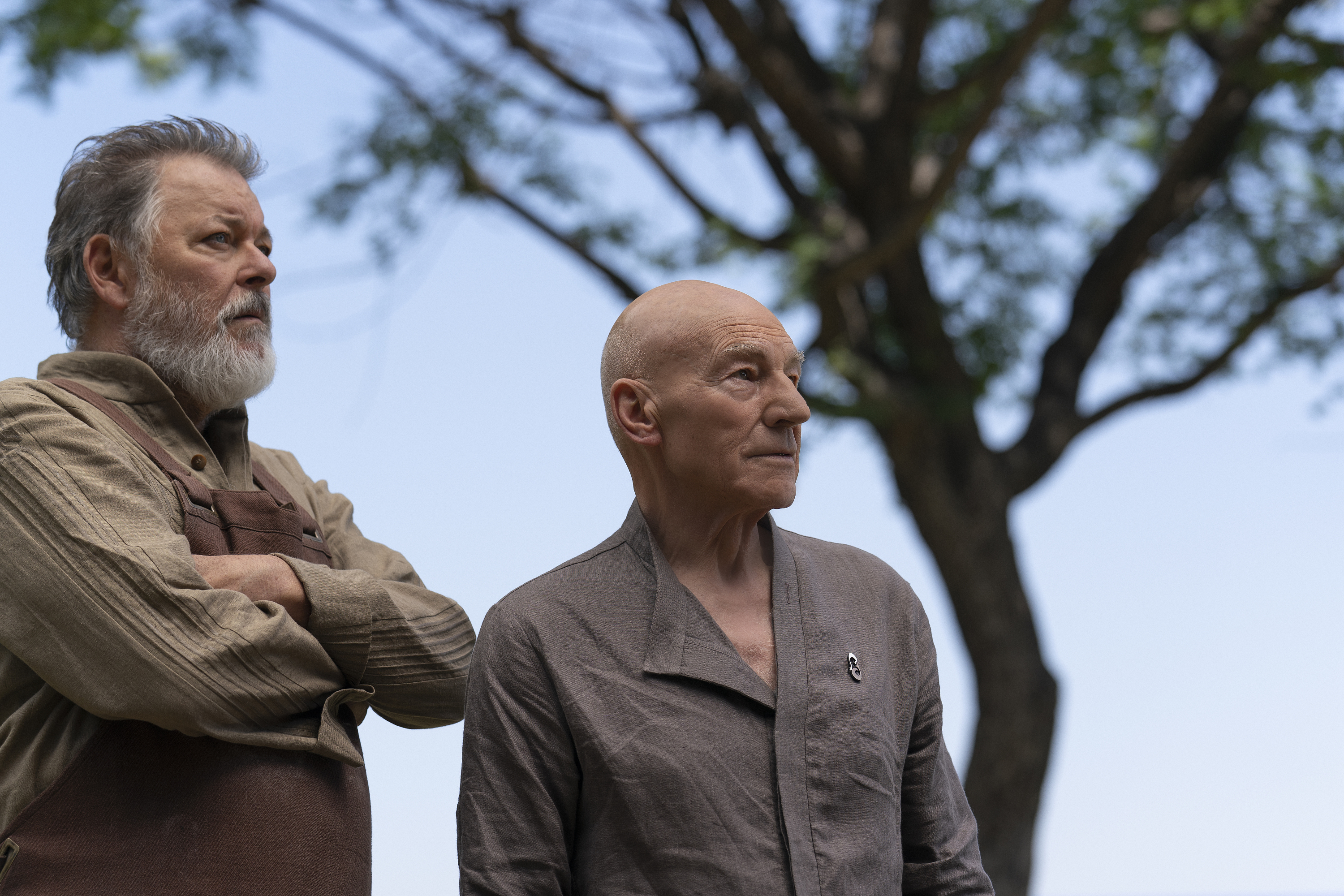 Picard and Soji transport to the planet Nepenthe, home to some old and trusted friends. As the rest of the La Sirena crew attempt to join them, Picard helps Soji make sense of her recently unlocked memories. Meanwhile, Hugh and Elnor are left on the Borg cube and must face an angered Narissa.

Jack's Review
A rare bright spot in this muddled mess of a series. The fact that Chabon and Goldsman think they need to shoehorn random backstory into every episode is actually amateurish and silly. Let's face it...we came to Picard to see TNG characters again. What we get instead is basically fan fiction about made-up characters with ones we slightly recognize shoved in as window dressing. We also lose another great character for absolutely no reason in this episode. But I digress....Riker yelling shield up and making pizza is classic. 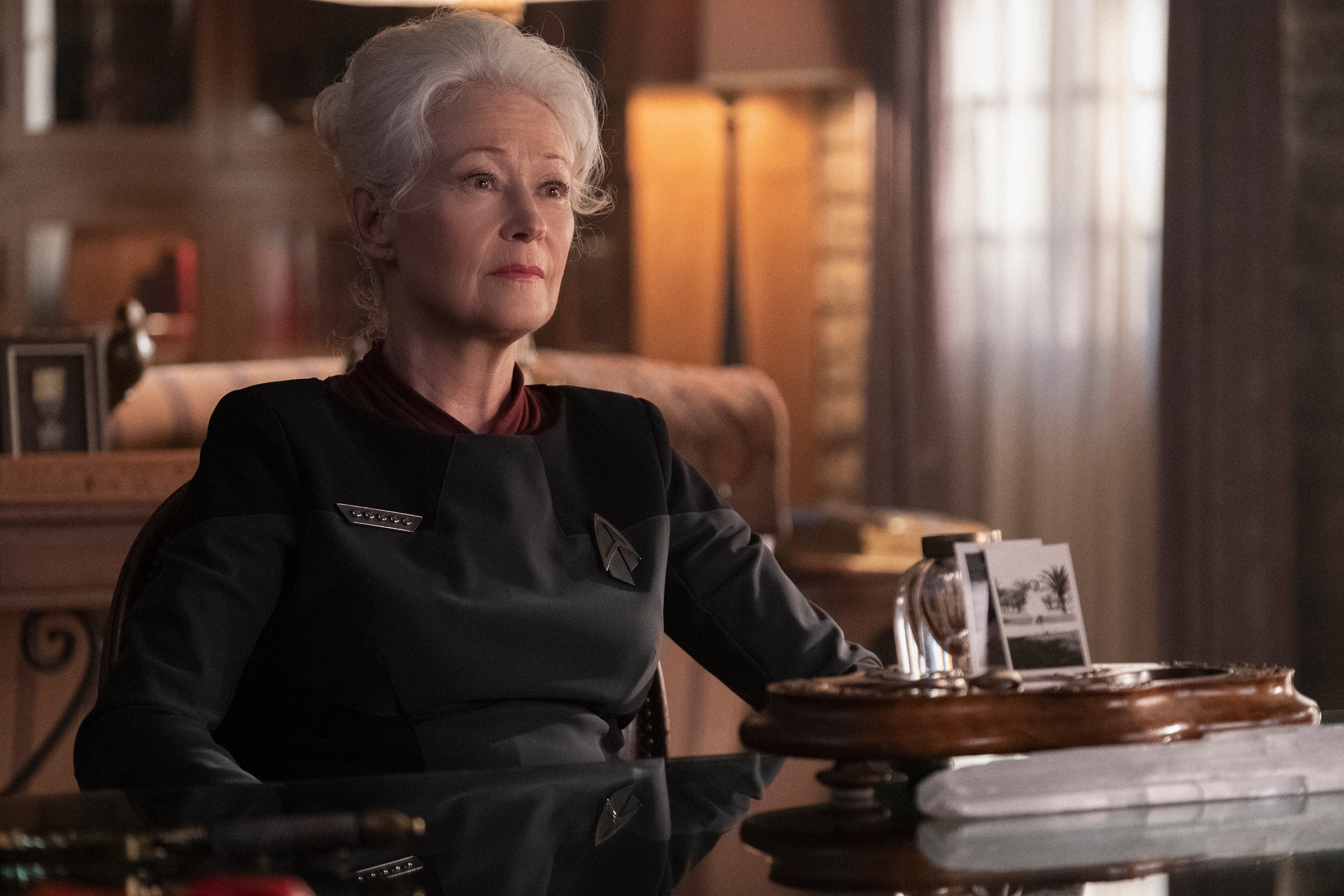 When devastating truths behind the Mars attack are revealed, Picard realizes just how far many will go to preserve secrets stretching back generations, all while the La Sirena crew grapples with secrets and revelations of their own. Narissa directs her guards to capture Elnor, setting off an unexpected chain of events on the Borg cube.

Jack's Review
Ah, Admiral Clancy, chief of Starfleet foul-mouthed diatribes returns. She actually tells the most celebrated and decorated Starfleet captain in history to STFU?!? I hope season 2 treats us to a horrible transporter accident with this lady in the starring role. 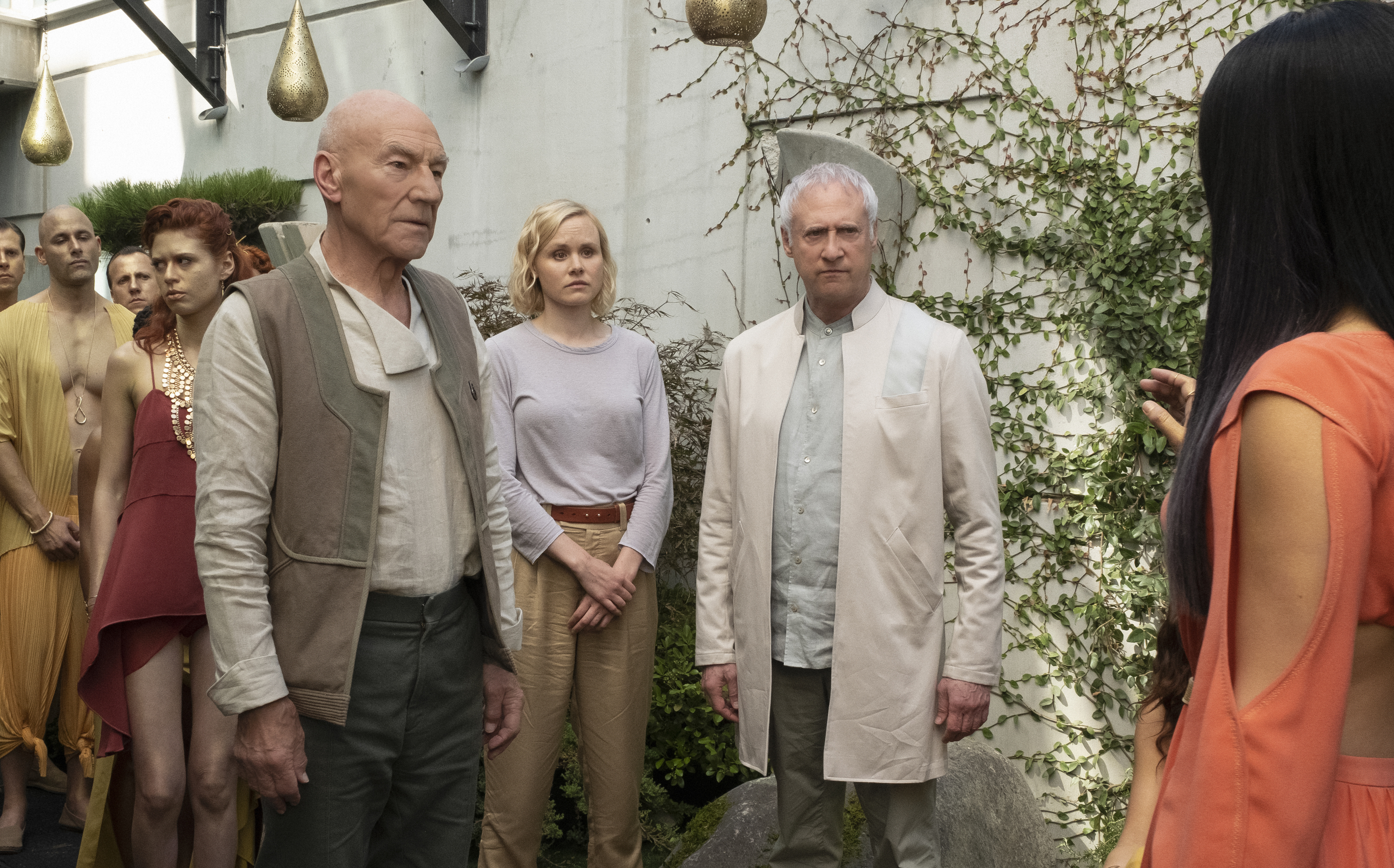 Following an unconventional and dangerous transit, Picard and the crew finally arrive at Soji's home world, Coppelius. However, with Romulan warbirds on their tail, their arrival brings only greater danger as the crew discovers more than expected about the planet's inhabitants.

Jack's Review
This one is pretty good. I don't have a lot of issue here. It sets up what should be a decent finale. 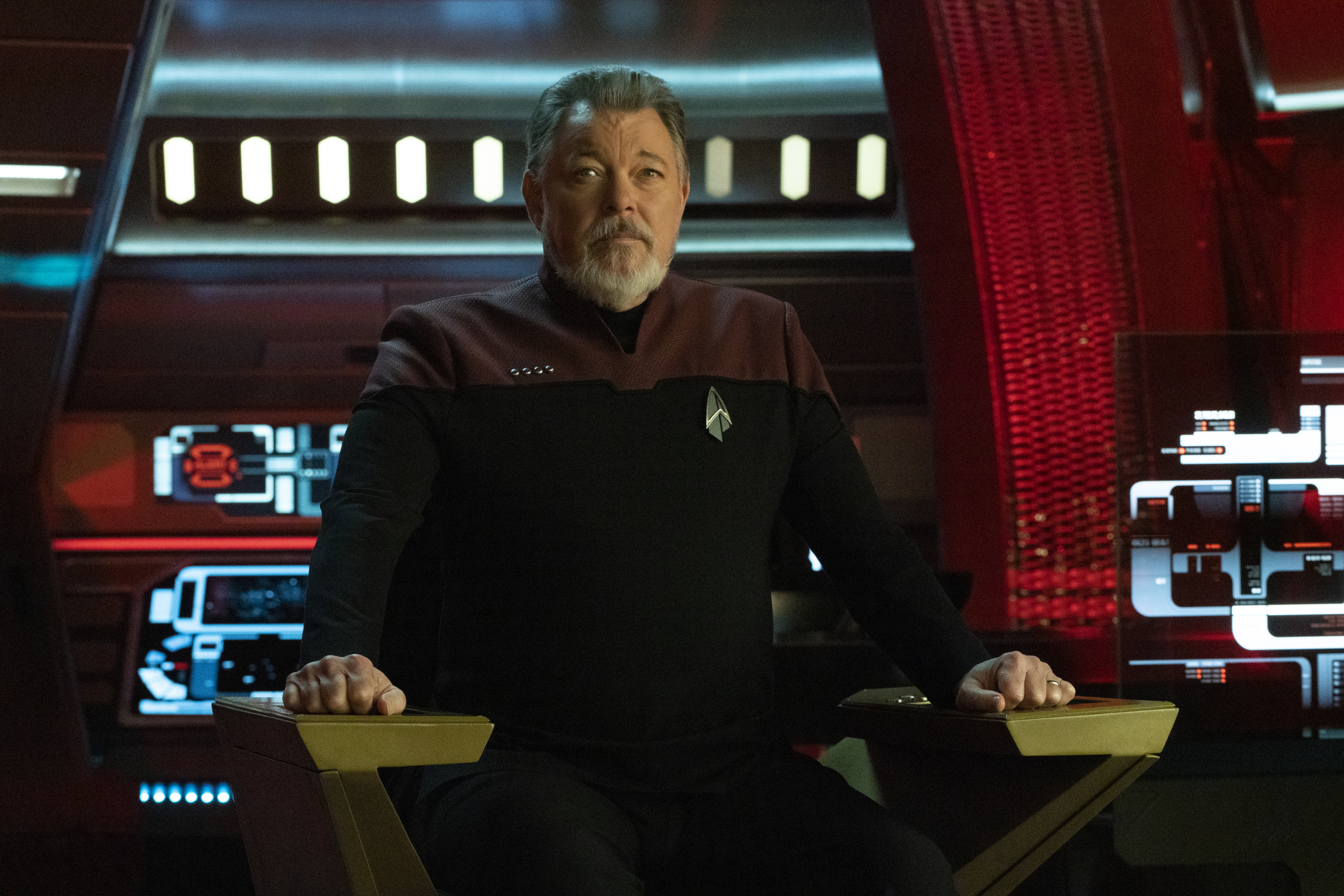 A final confrontation on the synthetics' homeworld, Coppelius, pits Picard and his team against the Romulans, as well as the synths who seek to safeguard their existence at all costs.

Jack's Review
Let me start off by saying this episode really only had two things that made me shake my head. Well, three. One: we had to wait ten episodes to see Starfleet ships?!? Two: And when we do they may as well be cardboard cutouts. They just sit in space in identical pointlessness. Riker's speech to Oh was worth the price of admission, however. Three: we sat through ten episodes to end up with what is essentially Star Trek Nemesis 2? Okay, here's how they should have done this whole mess. First off, if you are going to amass that many starships we need a battle. Start off with Starfleet and the Romulans trading punches - then, instead of giant mechanical space tentacles have synthetics in ships pour out of the big space rift and force Starfleet and the Romulans to team up in the face of adversity. Instead of Picard having the brain illness from "All Good Things" he would just try to fly the ship into the rift to destroy it. Then instead of turning Data off in that matrix box thing you load him into the golem body so Brent Spiner could play Data as an actual human - finally achieving his dream. Picard would repay his sacrifice from Nemesis by giving him a chance to experience a whole new life. As you can tell from my rantings, I really disliked this series. It was almost insulting. I have high hopes for season two...but the only way from here is up.